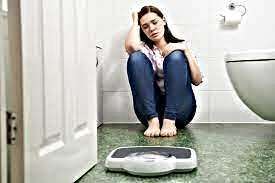 Purging disorder: How to treat this crazy illness?

Have you ever seen anyone throwing up right after eating a normal healthy meal? It is a very uncomfortable and irritating experience to see anyone like this. Whenever; you see anyone doing this then do remember that the affected person is suffering from the purging disorder. Therefore, it is important to consult some experienced doctor as soon as possible.

Purging disorder is somewhere between bulimia and anorexia. People suffering from it are not underweight or obsessed with overeating. They just like to force themselves to vomit sometime after eating.

Nowadays, purging disorder is quite common in college students. According to the latest data %, approximately 11% to 17% of female students and 4% of male students suffer from this strange eating disorder.

Let’s analyze this disorder in detail.

It is quite difficult for a normal person to diagnose a purging disorder. However, there are some signs that would help you to warn your friend or relative about this disorder. Therefore, you must keep an eye on the following symptoms to caution your loved ones before anything bad happens. It might be hard to tell if a person has a purging disorder. If you are worried about yourself or someone you know, here are some of the warning signs and symptoms to look out for:

Comments or behaviors that show a lot of worry about food, dieting, or weight loss

Signs or smells of vomiting

Wrappers from laxatives or diuretics

Frequent trips to the bathroom

Cuts or calluses on hands from forced vomiting

Why Are Eating Disorders So Common on College Campuses?

Purging disorder is common among college students due to different environmental, genetic, and psychological reasons. They suffer from these kinds of disorders as they have to go through stressful environments while pursuing their studies.

In addition, some students find it difficult to adjust to the college or university environment as it presents various kinds of challenges in front of them. Students living in hostels find it even harder as they have to live away from their home environment for the first time. They have to adjust in life without the direct support of their parents and close relatives. In addition, they have to live with their roommates and loss personal space and privacy. For most college students the academic environment is more challenging than high school.

Moreover, it is not easy to eat hotel or campus food if you are not accustomed to it. Students get full access to a wide variety of food items in a hostel environment which triggers weird eating habits in them. Some students also feel a lack of eating control and makes it difficult for them to control their appetite.

Youngsters have to face numerous adjustment issues after entering a particular university or college. If you are from a middle-class family then you face pressures to fit among students hailing from high-class society. In addition, institutional politics sometimes plays an important role in increasing stress in students.

Drugs and alcohol are quite common in US colleges and universities. Substance abuse can badly affect academic performance which results in additional stress. This may result in eating disorders such as Purging disorder.

Some female students also A New York Times article in 2012 highlighted the pressure female college freshman feel to lose weight in order to secure a successful bid in sorority rush. Diet culture is alive and well on college campuses and there is a common fear of “the freshman 15.”

Who is more affected?

Generally, people think that females are more affected by this disease as compared to men. However, in reality, this is not the case as these kinds of eating disorders are quite common among males . The ratio of this disease is higher in them.

In addition to that, transgender college students reported experiencing disordered eating at approximately four times the rate as compared to the cisgender class fellows.

How to cope with Purging disorder in the college environment?

Treatment for purging disorder is different for different. Actually, it depends on the symptoms and factors around the affected person. According to the details, some people might benefit from more intensive inpatient treatment and recovery programs, while others may like outpatient therapy options.

Inpatient treatment is quite popular in these cases as it is required to carry out medical monitoring or daily assessments. Outpatient treatment may also include psychotherapy and nutrition counseling.

It is extremely important to treat this disease in its initial stages as serious medical and mental health risks associated with purging disorder. At first, physicians try to identify the physical effects of this disease on the patient’s body.

In addition to all the above treatments, patients should also take the help of an experienced nutritionist, It would in identifying a long-term solution through implementing a proper dietary plan.

Drugs are not normally used to cure this kind of disorder . Doctors only use medicines to treat mood disorders caused by additional stress during purging disorder.

Purging disorder is a serious condition as it could be life-threatening in some instances. However, youngsters are not much aware of this dangerous disease as they think it is just a harmless medical condition. Therefore, educational institutions and government must come forward and raise awareness about this serious eating disorder by using effective medical platforms. In addition, they can also arrange different educational seminars and conferences on their respective campuses. Moreover, electronic and print media also have to play their due role by educating the general public about these disorders. It is important as it would increase awareness about this disease and make it more popular among the masses.